The Mustermann Family – Trauma of an Unattached Artist 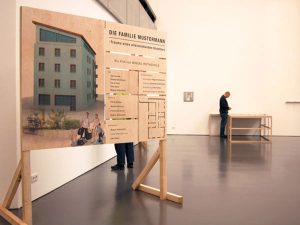 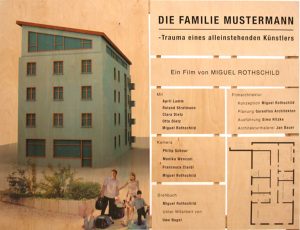 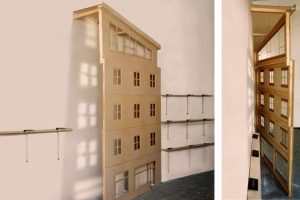 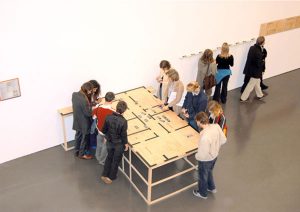 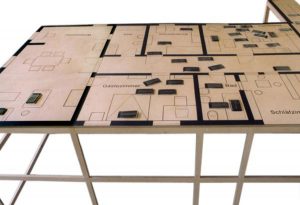 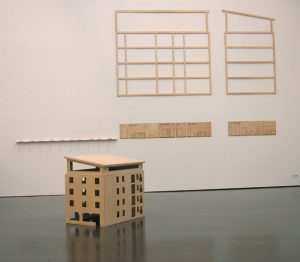 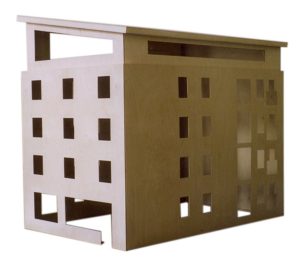 The film consists in an installation of sculpture-objects related to an architectural model of a typical German middle-class apartment building, 67 black and white flipbooks figuring a soap story, and a documentary photograph of an intercom doorbell system. The flipbooks are either placed within one of the objects or fixed to a shelf mounted to the wall that runs between further parts of the installation. Little chains ensure that the flipbooks remain in their place.
All the filigree sculpture-objects are made of light wood (plywood) and inspired in character by architecture modeling, devised as the film-set by the architects’ office Gorenflos Architekten. The façade, sections, and structure of the apartment house are installed on the walls with the elegance of empty shells.

A further element is a schematic section of the apartment where each room is handled separately; In addition, a shell model of the entire building is located on the floor.
The story takes place in a Musterwohnung (show apartment), the ground plan of which is set up as a table surface. The flipbooks are embedded in the plan of the rooms that stage the location of the action. Having passed the photo of the bell, we virtually “enter” the ground plan of the apartment via the booklets, and circulate through the apartment following the story, leaving it by the balcony, together with the central protagonist Erika as she throws herself over the railing.
A summary of the story is related via the short texts on the covers of the 67 flipbooks (each with approximately 40 black-and-white photographs and occasional animation inserts).

The film is brought to life between the thumb and index finger of the beholder. The tragic comedy reveals itself as told by its narrator, Miguel Rothschild. Playing the role of a disconsolate artist, Miguel has set out to retrieve the heart of his lost love, Erika. Erika has found the perfect love in the form of a man named Egon Mustermann, with whom she lives in a dream world: the perfect couple has two perfect children and they live in a perfect apartment. In this film — an amusing hodgepodge of melodrama, B-movie, soap opera, and comedy — Miguel goes to wild lengths to save his love Erika from what he views as a false do-it-yourself paradise. And in keeping with this tongue-in-cheek leitmotiv, the installation itself can be dismantled and packed away in a box — a boîte en valise of happiness.

The piece is situated between a conceptual installation and the narrative melodrama of the story. The first effect is that of an empty stage, visibly defined by the anonymous aesthetics of modern architecture models; at second sight, however, scale, abstraction, and display reveal that the stage-set is faceless and that the main concern is not purely architecture. The melodrama of the film only comes to life when actively looked at. The conceptual construction provides the framework for abyssal emotions, rivers of tears, and plenty of heartbreak. The basic theme is that of a disappointing paradise, of the cleft between appearance and reality in a realistic setting. Various installations by Rothschild on the subject of paradisiacal product names have sneaked into the flipbooks, adding a further reflective layer to the piece.

Helen Adkins
In German, Mustermann is a family name that is used as a generic family name. “Muster” literally