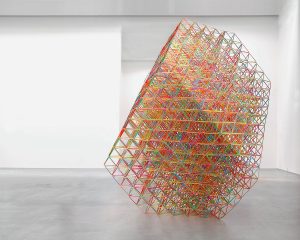 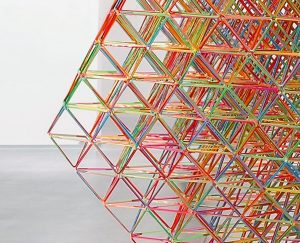 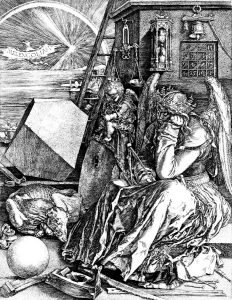 The Unbearable Lightness of Melancholy

Melencolia A.D. is the title of the work that Argentine artist Miguel Rothschild presented at the Neue Heimat – Berlin Contemporary exhibition in the “Berlinische Galerie” of the Berlin Museum of Modern Art, Architecture and Photograph.
In this piece, Rothschild quotes Melencolia I, Albrecht Dürer’s famous engraving, borrowing its polyhedron, which Rothschild constructs on a large scale. By including Albrecht Dürer’s initials in the work’s title and contrasting lightness, color and transparency with the density and dramaticism inherent to German art, Rothschild is bidding an ironic and thorough »adé« (good bye) to melancholy.
Rothschild’s polyhedron is built entirely out of thousands of colored straws that are interconnected to form triangles, giving this apparently fragile and filigree figure an astonishing sturdiness. By means of the material used, and despite its strict geometrical shape and mazelike interior, the piece arouses in the viewer a sense of the world of childhood and its carefree play: a paradise lost, left behind.
Whereas Dürer’s hard and heavy polyhedron covered up the landscape, Rothschild’s opens everything up, even the questions it suggests. One might think that the artist’s melancholy is generated by this very colorful lightness and the way the 21st century empties out meaning. Or one might think that the artist is melancholy because he would like to possess the lightness that he sees around him, in others, in the world, but not in himself. Yet, one wonders if this lightness in the face of the world and its events is real. Perhaps it does not really exist, not in others or in the self. It might be imaginary, a projection that Rothschild has calculated with remarkable precision.